Dear Friend,
Thank you very much for your attention to our work and your time to see our news!

VISIONS OF BEAUTY: Experience of the Sacred 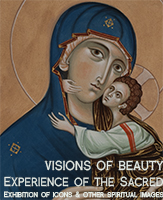 our works and works of other iconographers  starts in Melbourne (Australian Catholic University (ACU) ART SPACE (26 Brunswick Street, Fitzroy, Australia) at 18:00, - right at the first day of our first workshop. Here is a resized version of the flyer (right) and if you wish to download a full PDF version, here is the link:
http://sacredmurals.com/exhibitions-of-icons/exhibition_of_icons_melbourne_2015/exhibition_of_icons_in_melbourne.pdf

Press Release and photographs to be published later.

SECOND: WORKSHOPS
How Unpredictable!!! In 2014 we had a wonderfully organized exhibition in Wesley Seminary, but mostly little groups at the workshops...

2015 already starts in a different way! We have both groups in Melbourne almost full and ready to open a Waiting List soon.

Besides, we have also got a good group for San Diego and some for the one in Calgary too. By the. way, now we added the location for the workshop in Calgary -

In addition to these announced workshops we launch two more in Washington DC area. Here is our actual schedule for 2015:


THIRD: NEW ICONS
Click the image to see the description:

Relief Icon of the Last Supper by Olga Shalamova


THIRD: NEW TEXTS
During last month I occasionally came across two very interesting texts of American scholars. Both texts are dedicated to the images and their role, the ways of perception and understanding, the medieval world in relationship with our contemporary one. Hope you like them:

Video Illustration to the "Performative Icon" by Bissera V. Pentcheva

"From Constantinople to Silicon Valley: a Byzantine approach to IBooks" by Roland Betancourt
As always, we are happo to hear from you!
And - more news in the nearest future :)
With warmest regards,
Philip Davydov and Olga Shalamova